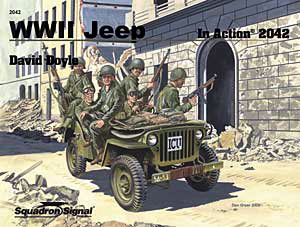 During World War II, the Jeep was enormously popular with troops and leaders. Originally designed as a reconnaissance car, Jeeps plowed through the sands of North Africa, the snows of central Europe, pulled aircraft across flight decks and ferried the wounded through jungles. Jeeps were configured for radio gear, armed with weapons, and bore stretchers. Large numbers of Jeeps were also delivered to allied nations. This book takes a detailed look at these vehicles’ service during World War II with more than 100 photographs, color profiles and detailed line drawings. Doyle; 52 pages.