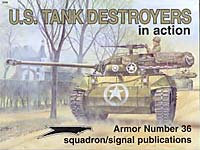 US Tank Destroyers in Action, (Reissue) By Jim Mesko. Reacting to the lightning successes of Germany’s blitzkrieg, the U.S. War Department began to develop a series of fast-moving, high velocity anti-tank guns on a variety of chassis, ranging from the Jeep to self-propelled armored vehicles, for use by the Army’s Tank Destroyer Command. Tank destroyers were also supplied to U.S. allies and served in almost every theater of World War II, and post-war in Korea and even later in Bosnia. More than 100 photos, 10 color profiles, black-and-white line drawings, color covers. 50 pages, soft cover, landscape format. Originally published 1998.

Search on eBay
Search for what you need, We suggest this but it is you who decide
Find items about "Tank Destroyers" on AliExpresS (c):