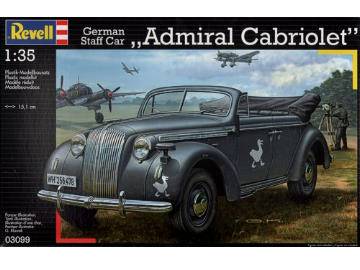 The Opel Admiral Cabriolet was originally designed as a civilian luxury car. However, once World War II broke out in 1939, Opel was forced to change their initial plans. Manufactured for the war effort instead, the Admiral Cabriolet became a high-end transport for German generals and other senior officers. Kit features finely engraved surface details, a detailed chassis and suspension, an authentically reproduced 3.6-litre 6-cylinder in-line engine, an opening hood, an opening top, a detailed interior, detailed internal fittings, filigree components and authentic decals for four vehicles.