While the design utilized the hull of the Pz.Kpfw. 38(t), including its original engine covers, the front armor plate with the driver’s as well as the radio operator’s visors, and the ball mount for the machine gun was eliminatcd. Thus, Sd.Kfz. 138/1 was the first modified vehicle without the original heavy machine gun ZB vd7 (MG-37(t»), which was replaced by a portable standard German machine gun. In place of the original fro nt plate. the vehicle was fitled with a new 25 mm thick plate angled at 17°. At the same time. this 150 cm high plate also acted as the gun’s shield. In the lower right corner there was a cast visor for the driver, in the middle a deep opening for the gun’s barrel, and in the upper left hand corner another small opening for the periscopic sight of the gun. The radio operator was moved into the open fighting compartment, where he functioned as an auxiliary loader when necessary.

Wait, Searching Wydawnictwo Militaria 101 for you… 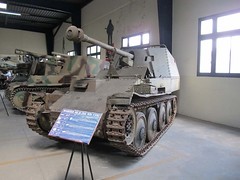 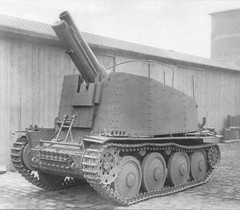