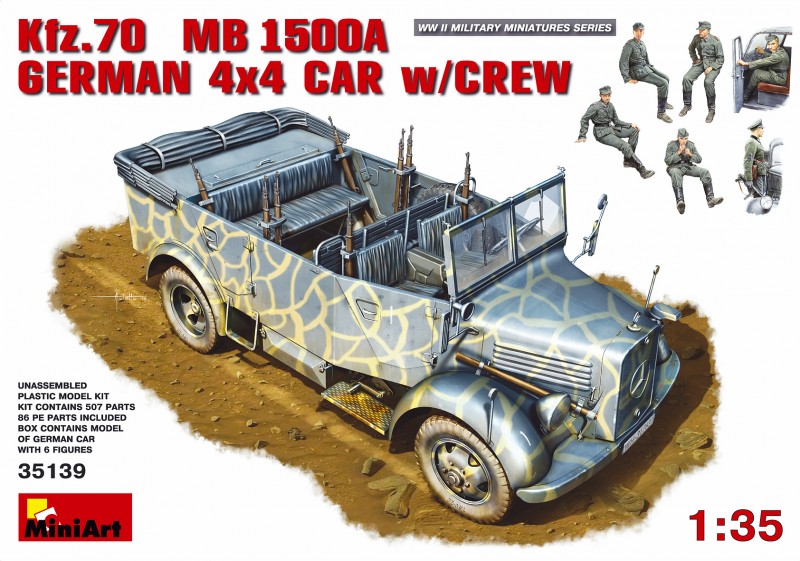 L1500 A 4×4 and L1500 S 4×2 trucks were developed by Mercedes-Benz Company in 1941. The vehicle was classified same as Steyr 1500A and Horch Typ. The basic type of body became Kfz.70, designed for transporting of 7 person including driver. For bad weather condition the body was equipped with retractable top and canvas panel, which could be settled on doors and sides. Trucks Mercedes-Benz L 1500A with Kfz. 70 were widely used, frequently trucks were as heavy staff cars. Also different bodies were based on L 1500A and L 1500S chassis, particularly fire trucks, radio cars and ambulances were produced on the L 1500A and L 1500S bases. More often for radio cars and ambulances were used 4×2 chassis. L 1500A trucks were produced from June of 1941 till July 1943, were produced 4900 trucks. Production of L 1500S started same in June of 1941, but was continued till July of 1944 and were produced 4100 trucks. Model details: · Highly detailed model · All New Tooling. Up-to-date technology using sliding moulds. · Fully-detailed engine compartment and chassis · 507 parts · 86 PE parts · Decals included · Full-color instruction