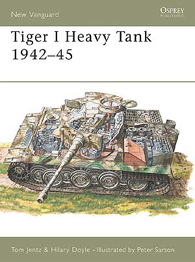 Probably the most famous tank of the World War II, the Tiger I was originally conceived in 1941 in response to the German Army’s experience in fighting British tanks and anti-tank guns in Western Europe and the North African desert. Following the invasion of Russia, the appearance of the Soviet T-34 and KW tanks lent a further impetus to the programme. The Tiger’s power and performance on the battlefield is emphasised by tables of relevant performance throughout the book, which clearly show the battlefield survivability of the Tiger and its superiority to many allied tank designs. This comprehensive and extremely detailed text is accompanied by a fine selection of black and white photographs showing the tank in use.

Wait, Searching NEW VANGUARD 05 for you…