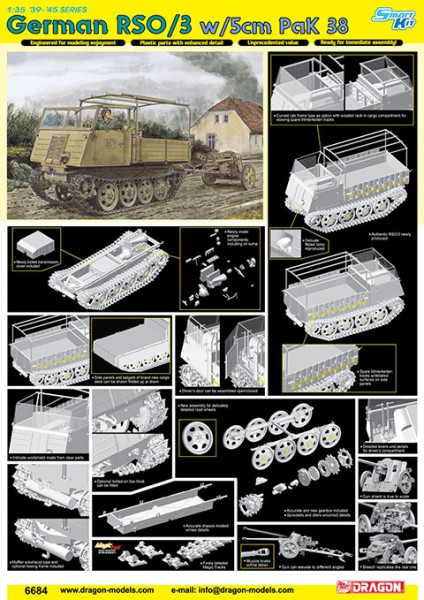 Dragon has followed up its earlier RSO kit mounting a PaK 40 gun with a 1/35 scale kit of the RSO/03. The only elements borrowed from the earlier kit are the chassis and running gear. Other parts such as the distinctive cab and cargo bed are completely new toolings in keeping with the redesigned RSO/03. Brand new, too, is the Deutz engine. To add to the appeal of this sharply detailed kit, it comes with Dragon’s acclaimed 5cm PaK 38 antitank cannon. This set thus creates a duo that was commonly seen on battlefields on the Eastern Front as antitank weapons and supplies were ferried to the places they were needed most. For an instant diorama in a muddy and snowy scene, this kit offers the perfect combination of pulling power and firepower!