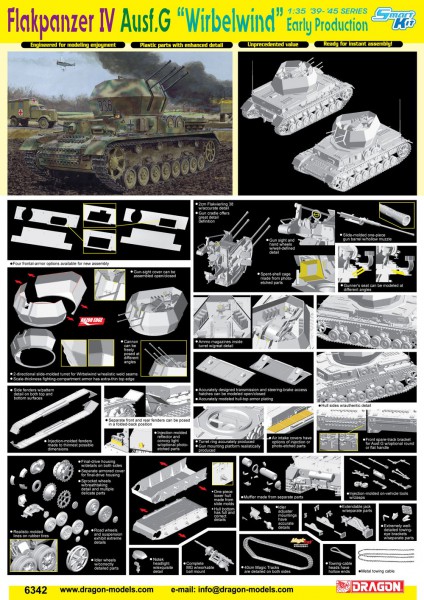 Dragon has produced a fantastic 1/35 scale plastic kit of the Flakpanzer IV Wirbelwind. The kit depicts an Early Production version of the antiaircraft platform based on a Panzer IV Ausf.G chassis. All associated detail of the open-topped turret, hull and running gear is accurately represented in true-to-scale miniature. The kit utilizes Dragon’s highly acclaimed kit of the 2cm Flakvierling 38 weapon system, a finely detailed replica of the original four-barreled gun. Inside the box, modelers will find many slide-molded plastic components, as well as the convenience of Magic Tracks, plus some photo-etched parts such as the cage for spent shell cases. This latest kit from Dragon allows modelers to easily create any specific vehicle from the Flakpanzer IV Wirbelwind family.