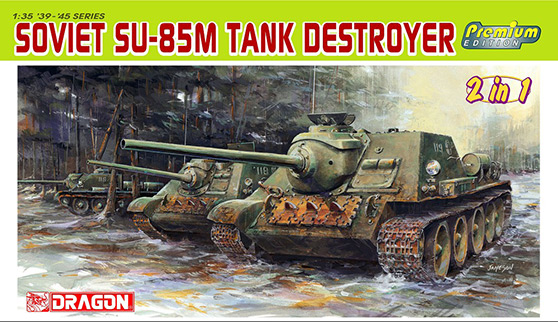 A kit from the brand DRAGON Models the "Soviet SU-185M Tank Destroyer".

Dragon has now released a Premium Edition model of the SU-85M. Produced to an accurate 1/35 scale, the kit contains many upgraded parts such as photo-etched components for intricate pieces (for example, spare-track tie-downs, fuel tank straps, and engine louvers and grills), plus a metal gun barrel. For sheer convenience, there are Magic Tracks too. What makes this kit even more versatile is its 2-in-1 nature, for it permits either an SU-85M or an SU-100 Early Production vehicle to be built. Thus, alternative parts such as fenders, gun barrels and gun shields are all included in the box. This Premium Edition kit builds upon the vehicle’s earlier success and offers modelers even more than before!