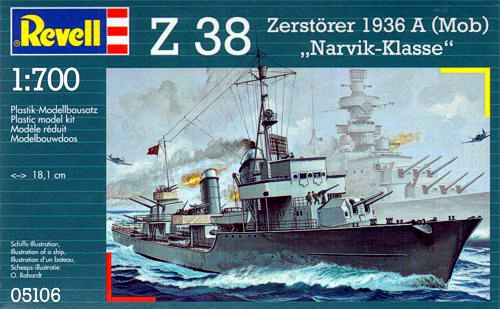 Launched on August 5, 1941, the Z38 was the second-to-last 1936A (Mob) sub-class destroyer built for the Kriegsmarine. Like other ships in her class, the Z38 recycled elements – including 150 mm twin turrets – from planned “O”-class battlecruisers. Renamed “Nonsuch” by Great Britain after WWII’s end, the Z38 served as a test ship before she was scrapped in 1949. Kit features a waterline hull, a deck with extensive superstructures, four 150 mm guns, eight torpedo tubes, lifeboats and marking options for four “Narvik Klasse” destroyers: Z31, Z33, Z37 and Z38.

Search on eBay
Search for what you need, We suggest this but it is you who decide
Find items about "Destroyer" on AliExpresS :