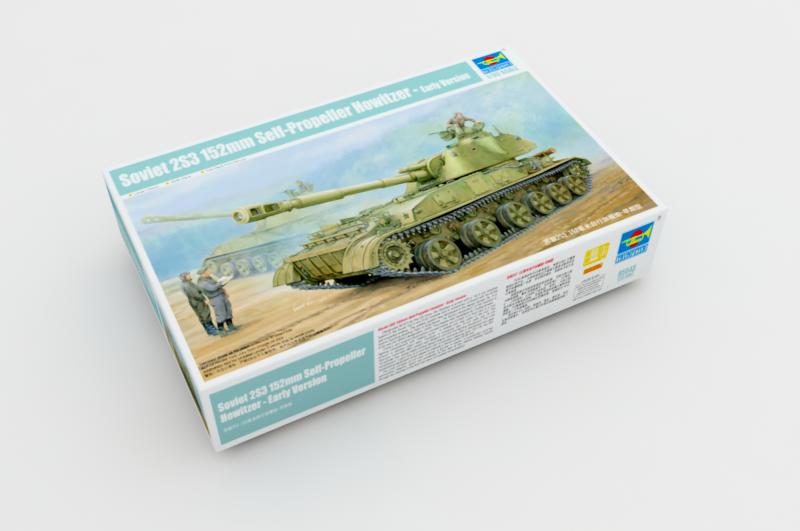 Designated M1973 by the US Army, the Akatsiya is armed with a 152.4 mm howitzer based on the Soviet 152.4 mm D-20 howitzer and is sometimes confused with the M109 self-propelled artillery. The artillery system was developed at the design bureau No. 9 of Kalinin Machine-Building Plant in Sverdlovsk. The factory designation of the howitzer is D-22 and the GRAU designation, 2A33. The chassis was developed by Uraltransmash. Driver’s and engine-transmission compartments are located in a front part of a hull, fighting compartment with rotatory turret – in middle and rear parts of the hull. The armour is welded rolled steel. Howitzer is equipped with R-123 radio set, R-124 intercom, automatic NBC system with filtration unit and fire-fighting equipment. The V-59 12-cylinder four stroke water-cooled diesel engine connects with a mechanical twin gear transmission, a gear box is in one block with a planetary steering gear. SO-152 has self-entrenching equipment which allows to prepare a trench within 20-40 min. The crew consists of 4-6 men: a driver, a gunner, a loader, a commander, and two ammunition bearers, which are positioned to the rear of the vehicle feeding rounds through two hatches in the hull rear when in masked firing position.

Wait, Searching Trumpeter 05543 for you…

A while back Trumpeter announced the 1/35 scale Soviet 2S3 self-propelled howitzer, well we can now see what to expect. The 2S3 is based on the Soviet D-20 152.4mm howitzer, and carries a 4-6 man crew. This self-propelled howitzer entered service in 1971 as the Soviet response to the US made M109, and has served in Afghanistan and during two Chechen wars, with it recently have been used during the Libyan civil war. Source:Armorama