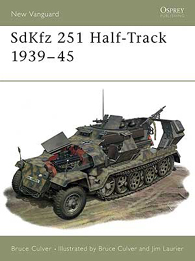 Following in the best traditions of German ingenuity in design and construction of armoured vehicles, the SdKfz 251 firmly realised the concept of a competent cross-country tactical vehicle for armoured infantry units. So successful was this half-track that not only did a modified version of it remain in use with Czech forces well into the 1980s but also, ironically, the armoured infantry tactics that the Germans pioneered with it were adopted by Allied forces in the Second World War and helped them to achieve the eventual defeat of Germany. This book covers the genesis and development of the SdKfz 251, and details the numerous modifications and variations that sprang from combat experience.

Wait, Searching NEW VANGUARD 25 for you…

Wait, Searching SdKfz 251 for you…